Deputy Country Director
For if you remain silent at this time, relief and deliverance will arise for the Jews from another place and you and your father's house will perish. And who knows whether you have not attained royalty for such a time as this? (Esther 4:14)

Thembi currently works for South Africa Partners as a Deputy Country Director. She joined South Africa Partners in July 2004, and has a 13 year work history with the organisation. Her current job responsibilities include supporting National Programmes with a focus on Human Resourses, Programme Management, Administration and Finances. Thembi graduated with a Diploma in Nursing (General, Community, Midwifery) and psychiatry in 1990 and worked at King Edward VIII hospital in Durban, KwaZulu Natal, specialising in clinical and critical nursing care. She studied further with the University of Western Cape and obtained a Certificate in Public Health (2007) and a Master of Public Health (2013).

Thembi joined the NGO Sector in September 2001 as a Provincial Coordinator for the National Association of People living with HIV/AIDS (NAPWA). She has gained 17 years of valuable experience in the area of HIV/TB/STI management, partnership development, programme management, advocacy for programmes designed for People Living with HIV, Care and support to improve patient outcomes for people on TB,Diabetes, Hypertention and HIV chronic medication. Thembi has also supported a nationwide Department of Correctional Services HIV Prevention Programme. 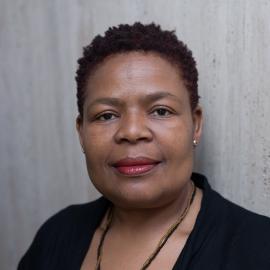