Mandela Centenary Celebration
In partnership with the JFK Library Foundation

On Sunday, June 17, 2018, South Africa Partners and the JFK Library Foundation hosted an open discussion with South African activists Max and Elinor Sisulu at the JFK Presidential Library and Museum to honor Nelson Mandela’s Centenary. The event celebrated Mandela’s uniting leadership and reflected on its relevance today for the next generation of leaders who are carrying his vision forward. Young Bostonians from the Boston City Singers kicked off the day with an exuberant medley of traditional South African songs.

The event also remembered Mandela’s historic visit to Boston on June 23, 1990, an event that brought Boston communities together in celebration of democracy and racial justice.

With a choir performance by Boston City Singers

Max Sisulu was born in Soweto, South Africa in 1945. Political repression, harassment and persecution of his parents, Walter and Albertina Sisulu, ensured that he and his siblings became politically conscious and active at an early age. In 1963 Max was arrested at age 17, making him the youngest person at that time, to be detained under the notorious 90-day law. He and his mother Albertina, who had also been detained under the same law, were released from prison after the arrest of his father Walter with other leaders at Rivonia on 11 July 1963. Max went into exile shortly after, unaware that it would be two and a half decades before he would return to his homeland. During his exile, Max underwent military training in the Soviet Union, before going on to study at the Plekhanov University in Moscow, where he graduated with a Masters degree in economics.

Max Sisulu served as Speaker in South Africa’s third democratic Parliament from 2009-2014. His parliamentary career started when he was elected to the first democratic Parliament in 1994, alongside his mother Albertina Sisulu and his sister Lindiwe Sisulu, South Africa’s current minister of International Relations. During his first parliamentary stint, he served as chairperson of the Parliamentary Committee on Reconstruction and Development (RDP). In 1996 he was appointed Chief Whip of the majority party – the African National Congress (ANC). He resigned from Parliament in 1998 to take up the post of Deputy Chief Executive of Denel Aerospace. From 2003 to 2006 he served as Group General Manager at SASOL, one of South Africa’s major energy and chemical companies. He went on to serve as non-executive director on several boards, including the Human Sciences Research Council (HSRC), the National Economic Advisory Forum (NEAF) and African Rainbow Minerals.

Elinor Sisulu is Zimbabwean-born South African writer and human rights activist who combines training in history, English literature, development studies and feminist theory.  She graduated from the University of Zimbabwe in 1980 and the UN Institute of Economic Development and Planning in Dakar, Senegal in 1981.

She was one of the first crop of black civil servants in the newly-independent government of Zimbabwe in 1981 where she worked as a researcher in the Ministry of Labour.  In 1985 she received a fellowship to study at the Institute of Social Studies in The Hague, Netherlands where she met South African exile Max Sisulu. They married in 1986 and she joined him in Lusaka, Zambia, where she worked for the International Labour Organisation's Lusaka Office from 1987 to 1990 on ILO programmes of assistance to the Southern African liberation movements ANC, PAC and SWAPO.

In 1991 she moved with her family to South Africa where she worked as a freelance writer and editor. In 1993 she was the Radcliffe International Visitor at the Mary Ingraham Bunting Institute in Cambridge, Massachusetts where she started writing and researching the biography of her parents-in-law. The biography Walter and Albertina Sisulu: In Our Lifetime was published in 2002 and secured the prestigious 2003 Noma Award for publishing in Africa. On the recommendation of Nelson Mandela, Time Warner Books published the book in the UK in November 2003.

In 1994, Elinor wrote a children's book about the first democratic elections in South Africa. The Day Gogo Went to Vote was first published in the US in 1997 and listed among the 100 best books of the American Library Association, Smithsonian Institute and International Reading Association. The book also won the Jane Addams Peace Award, the African Studies Association Award and the Once Upon a World Children’s Book Award.

From 2004 to 2009, Elinor ran the Johannesburg office of the Crisis in Zimbabwe Coalition, developing it into a hub for regional and international solidarity initiatives to promote democracy, peace and justice in Zimbabwe.

Since 2009, Elinor has pursued her passion for children’s literature as a founder member and chairperson of the Puku Children’s Literature Foundation. She has served on a non-executive director of numerous boards, including the Open Society Initiative for Southern Africa (OSISA) and the Recycling and Development Initiative of South Africa (REDISA).  She is currently a board member of the National Arts Festival. Elinor has been a judge of numerous literary prizes, including the Commonwealth Writer’s Prize and the Alan Paton Award.

Charlayne Hunter-Gault is an award-winning journalist with more than 50 years in the industry, extending her work at various times to all media. She is the author of four books—the latest an e book, called Corrective Rape, which details the devastating way some men in South Africa attempt to “correct” gay women’s sexual identity; To the Mountaintop: My Journey Through the Civil Rights Movement,” is a historical narrative for young readers grade nine and up, published by The New York Times and Roaring Brook Press. Her other two books are New News Out of Africa: Uncovering the African Renaissance, Oxford University Press and In My Place, a memoir of the Civil Rights Movement, fashioned around her experiences as the first black woman to attend the University of Georgia, in 1961, now a Vintage Press paperback.

In 2005, she returned to NPR as a Special Correspondent after six years as CNN's Johannesburg bureau chief and correspondent. She joined CNN in April 1999 from National Public Radio, where she worked as the network's chief correspondent in Africa and was awarded a Peabody in 1998 for her coverage of the continent.

Hunter-Gault worked for 20 years with the PBS NewsHour, alternately as substitute anchor and national, as well as international correspondent. And she has now returned to the NewsHour as Special Correspondent, doing an unprecedented special series called Race Matters, focusing on solutions to American’s enduring race problem.

She began her journalism career as a reporter for The New Yorker, to which she still contributes; she then worked as a local news anchor for WRC-TV in Washington, D.C. later as the Harlem bureau chief for The New York Times. Her numerous honors include a New York Times Publisher's award for a story she worked on detailing the life of the youngest victim of a heroin overdose in 1970. Hunter-Gault also has won two Emmy awards and two Peabody awards—the first for her work on Apartheid's People, a NewsHour series about South African life during apartheid; the second for her work in Africa for NPR, in which, according to the Peabody citation, she "demonstrated a talent for ennobling her subjects, and revealed a depth of understanding of the African experience that was unrivaled in Western media." Over the years, Hunter-Gault has been the recipient of numerous other awards for her work and in August, 2005, she was inducted in the National Association of Black Journalists Hall of Fame. In 2014, she received Black Enterprises Legacy Award. In 2015, she was honored with the Washington Press Club Foundation's Life Time Achievement Award and that same year was also inducted into the Atlanta Press Club's Hall of Fame.

Hunter-Gault is a sought after public speaker and holds some three dozen honorary degrees. She is married to businessman Ronald T. Gault and has two adult children, Suesan, an artist and singer, and Chuma, an actor. 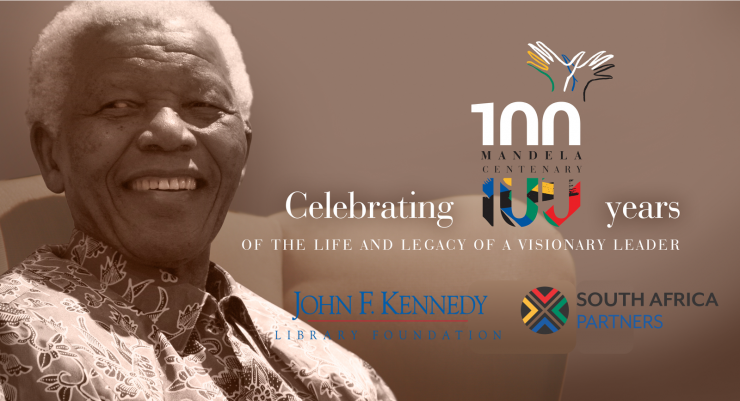 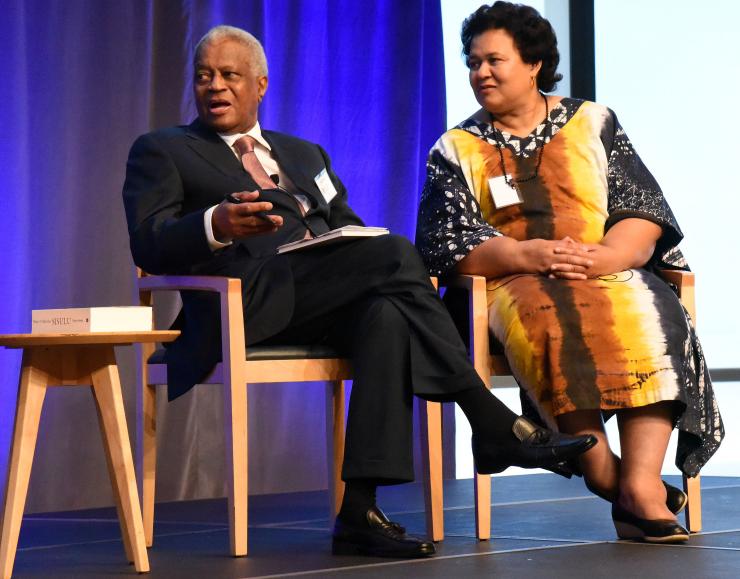 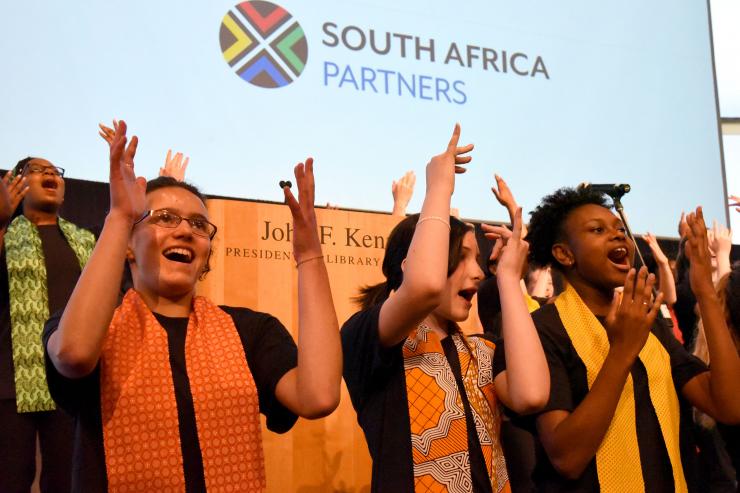 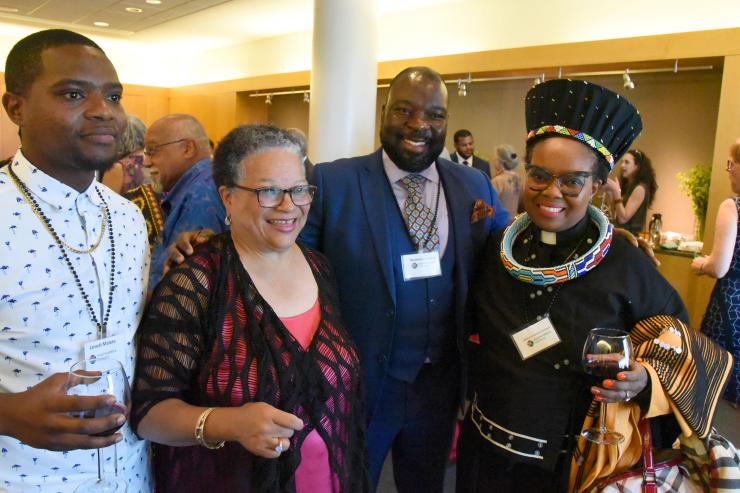 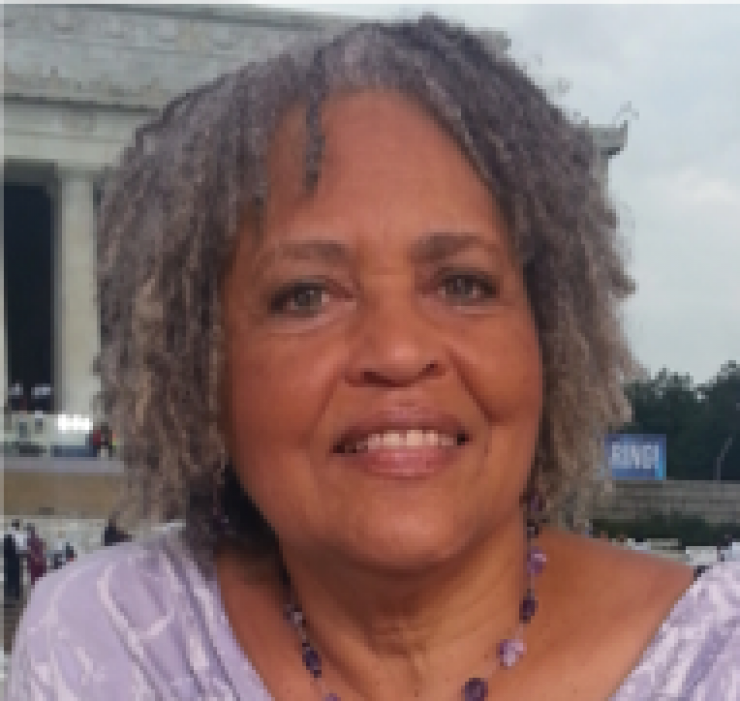